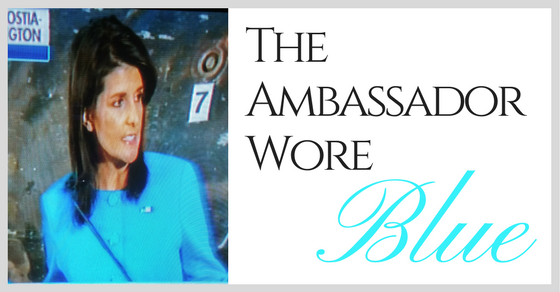 U.S. Ambassador to the U.N. Nikki Haley sent a visual message to the world when she wore blue to reveal tangible evidence of Iran’s violations of the U.N. nuclear deal at a news conference this morning.

The U.S. unveiled classified material in a scene reminiscent of Ambassador Adlai Stevenson during the Cuban Missile Crisis. The ambassador said, “The United States stands ready to share what we know to further the cause of peace.” She wore the color of peace — blue — to make her declarations.

Blue says fidelity, trustworthiness, intelligence and peace — exactly what the ambassador spoke about in her speech. She didn’t wear red, which many would have chosen. Instead of saying “aggressive power” with red, the ambassador’s color message said “calm, confident authority and strength.”

The color of clothing is important to business people as well as diplomats.
When I brand my client’s wardrobes I always take color into consideration. For instance, I used a soft gray suit to style a client whose work took her into venues in which she had to work with small children and impress donors. A black suit on her statuesque frame would have been intimidating to small children. The softer shade communicated her professionalism without alienating those she wanted to reach.

Another client needed a powerful look for a speech on a cold and rainy day. I dressed her in a warm, vibrant yellow to bring visual energy and optimism to her presentation. She stood out as bright and positive in a dreary landscape.
Whether you are the U.S. ambassador to the U.N. or a business person, articulate your visual message through the use of color. It’s powerful.